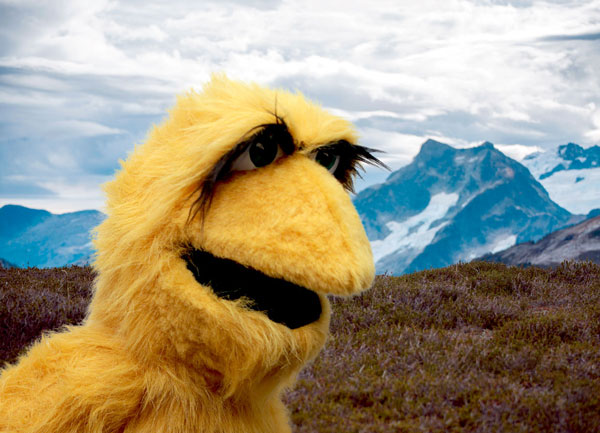 Under its previous name of EDM FX, Duffy’s Puppets began in 2002 with the creation of a puppet for the black light number of a local community variety show called “The Castle Downs Variety Show”. It was during this trial and error process that the love for creature design and creation was discovered.

In 2005 Duffy’s Puppets was asked to build Audrey from The Little Shop of Horrors for an Eastglen High School play. Although this seemed like a daunting task for the newbie puppeteer, in the end, with the help of both students and parents the 4 Audrey’s were completed with great success.

After a long hiatus to pursue other more musical ventures Duffy’s Puppets came back to the sewing machine to create Gabbo. Bringing together the band and the puppets Gabbo, Gabbo, Gabbo was developed as a spin off to a Simpsons episode and character. Three variety style music shows staring Gabbo played at the Avenue Theatre eventually ending on Halloween night in 2014 with Gabbos death.

It wasn’t until about a year later that another opportunity knocked. Mr. Simon Glassman, a local comedian and producer was in talks with Bite TV to create a television show based on the web series he created called Felt Up. Felt Up was the world’s first reality series entirely populated with puppets and Duffy’s Puppets was contracted to build all 26 of them. It was during that 2 month construction period that Duffy’s Puppets really mastered its craft of puppet making.

After working with Simon and the Felt Up crew building and shooting the series Trevor Duffy and long-time friend Chris Boyle decided to take a crack at their own puppet web series called Social Fabric. With a budget of $0 and cashing in many favours from friends, one 10min episode was completed and a second episode was scripted. Social Fabric will be an ongoing fun project for Chris Boyle and Duffy’s Puppets.

The Felt Up project led to two other jobs for Duffy’s Puppets. Three characters were made for local musician and songwriter Colleen Brown’s music video, and two characters were created for Edmonton metal band STRIKER.

THE STORY CONTINUES AND IS EVER CHANGING. The Imaginarium is the next big project to get off the ground and in our down time new projects continue to pop up. Follow us on Facebook, Twitter and Instagram for updates on what’s going on.